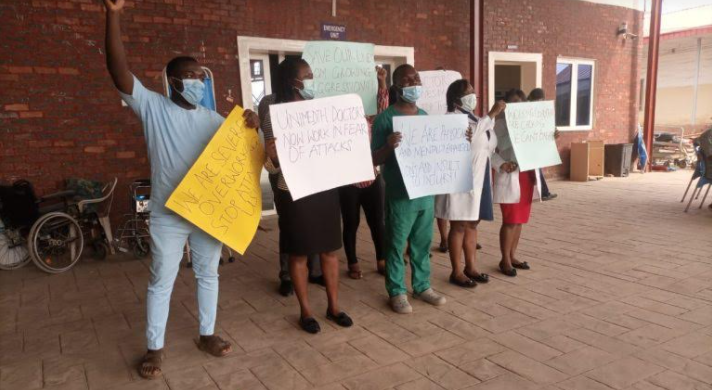 The resident physicians of University of Medical Sciences Teaching Hospital, Ondo Statebegan a two-day warning strike to protest against an attack on a doctor.

A relative of an elderly patient allegedly assaulted the military doctor on Tuesday and inflicted injuries on him.
The victim, identified simply as Dr. Sayo, works in the accident and emergency department of the hospital.

It was established that the attacker was unhappy with the way said doctor dealt with the patient, which led to an altercation between them.

Witnesses said it took the intervention of men from Amotekun’s corps before the doctor “was rescued”.
On Wednesday, doctors held up signs protesting the attack, demanding that management treat the affected doctor urgently.

They also simultaneously staged peaceful protests in the Ondo and Akure centers of the hospital.

They called on the state government to ensure adequate security at the hospital premises to prevent the incident from happening again.

“It is sad that we have found ourselves in this precarious situation. More than 100 staff members have left the hospital, creating a burden for us,” he said.

“We implore the state government to employ more doctors to solve the problem. We also want the government to provide adequate security on the hospital premises.

Also speaking on the issue, Ibidapo Bolayemi, a doctor, said the hospital was understaffed, urging the state government to employ more doctors.

She said doctors should be paid regularly to encourage them in the performance of their duties.

The anonymous assailant was taken into custody by Amotekun officers who responded to the incident.
The body has yet to make an official statement on this as of this report’s filing.

Support the integrity and credibility journalism of PREMIUM TIMES

Good journalism costs a lot of money. Yet only good journalism can guarantee the possibility of a good society, an accountable democracy and a transparent government.

For free and continued access to the best investigative journalism in the country, we ask that you consider providing modest support to this noble endeavour.

By contributing to PREMIUM TIMES, you help sustain relevant journalism and keep it free and accessible to everyone.