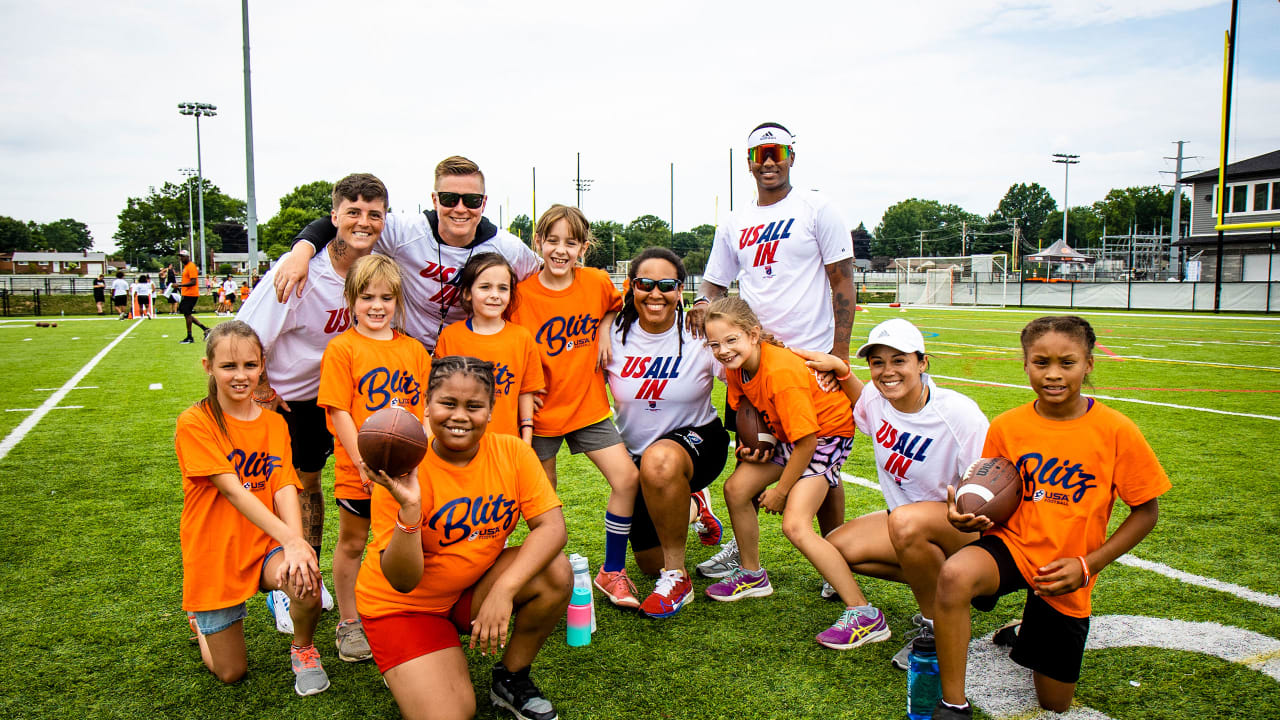 For many women interested in football, Brownson is a trailblazer.

She was the first woman to coach in an NFL regular season game in 2020. She is one of the few female coaches currently holding a full-time coaching position, and her duties have only expanded since joining the Browns in 2020. –Head coach Kevin Stefanski has added the assistant wide receivers coach to his responsibilities this offseason.

With Brownson’s growing popularity in the game and the programs provided by the Browns, girls’ participation in flag football continues to grow in northeast Ohio.

Northeast Ohio Girls High School’s Flag Football division has grown from 55 girls in 2021 to over 140 girls in 2022, and that growth is expected to continue with events like the Canton Clinic, which was for girls ages 8 to 18, and an annual Girls High School Flag Football Championship Tournament, which began in May at FirstEnergy Stadium. The Browns also continue to push for flag football to become a fully sanctioned varsity sport available to female student athletes through OHSAA by hosting more clinics and events featuring Brownson.

“It’s been really cool for me,” Brownson said. “I have been able to meet a lot of young people who are just amazed that they can add ‘football coach’ or ‘scout’ to their list of what they want to be when they grow up. ‘it’s about.” .”

Brownson, who started playing football aged 8, joked that she was “envious” of the expanded opportunities girls are given to play football. She was unable to play in high school, but believes more women are about to enter the professional ranks of the sport as girls’ participation in flag football is on the rise.

The exposure of girls practicing this sport has also increased. An example of this will be the August 4 Hall of Fame game between the Raiders and Jaguars at Tom Benson Hall of Fame Stadium – Kirtland High School and Lake Catholic High School Girls Flag Football Teams will play during halftime of the match in custom Browns jerseys.

“It will be the memory of a lifetime for them,” Brownson said. “It’s gotta be the coolest feeling for them to be able to play an NFL game in front of a crowd like that. It makes it feel more and more real. It’s going to be goosebumps, I’m sure.”

Brownson could also get goosebumps next week when she walks the sidelines in Finland.

This is where Brownson’s work in a head coaching role with USA Football will be on display. The months of preparation leading up to the World Championship were a welcome new challenge for Brownson as she took command of the roster build, coaching staff and team identity. The team held their last practice of training camp on Monday at

Brownson relied on her fellow coaches with the Browns for advice. Offensive quality control coach Ashton Grant and assistant defensive backs coach Brandon Lynch, for example, joined her in March for tryouts in Florida and helped pick the team’s top 45 players.

In Finland, Brownson will lead the team alone. Odessa Jenkins, who is the team’s running backs coach and helped coach the clinic on Tuesday, said the team instantly had complete faith in Brownson after everything she’s already accomplished as a ‘coach.

“You don’t have to earn respect when you already have it,” Jenkins said. “I think she’s a player’s coach. She’s very meticulous. When you’ve been coaching the game for as long as she has, you understand the nuances and the preparation. She came into the room with respect.”

When Brownson returns to Cleveland, she will resume her normal day-to-day duties with the Browns – and continue to push forward as a pioneer for women in football.

The progress she helped create was all around her Tuesday in Canton.

“I never really came into football to be a ‘first’ or a ‘pioneer’,” she said. “Those kinds of things were very timely. All I really hope is that I set a pretty good example for young women who want to work in football, play football or be in football from a one way or another.”

‘Hijrah’ moment: Coming out of the dark side of payday loans – Universities

Your Guide to a Day Trip to Governors Island