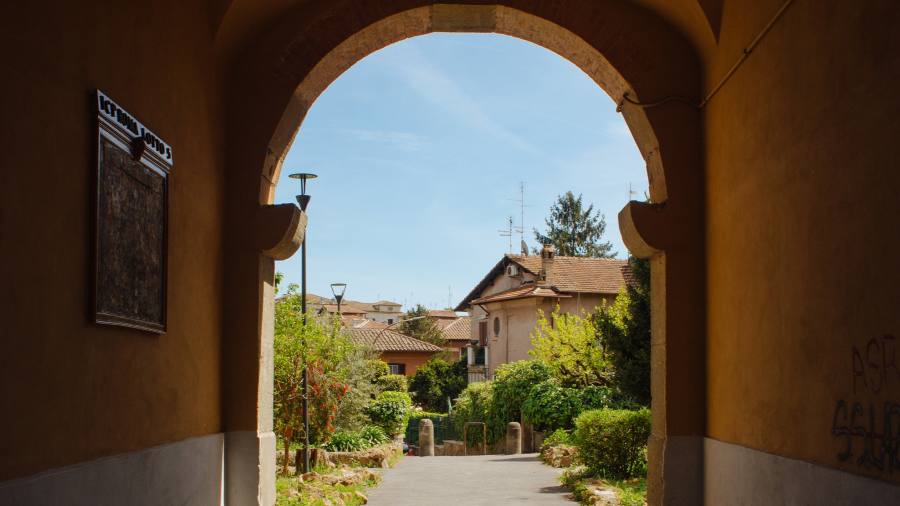 If you are romantic in nature, walking through the Garbatella district of Rome will make you feel like you are in a fairy tale. If you’re a history buff, it’s like opening a book with perfectly preserved pages. If architecture and urban planning are your passions, you will certainly be satisfied, while gourmets will be delighted with the charming restaurants scattered throughout this leafy district.

Whatever you’re looking for, you’re likely to find it in this historic district just south of central Rome, where amid secret gardens and courtyards, the chaos of the Eternal City eases to a point of tranquility. .

“Here in Garbatella, you can’t help but feel serene and at peace with the universe,” local resident Sergio Pannunzio said as he proudly showed me the linen-adorned faded red buildings that looked artfully arranged for a photography. “It’s one of the few neighborhoods where you can still feel the sense of community of the past. It’s like stepping back in time.” Children here still play football unsupervised and mothers call them out the window when lunch is ready.

Garbatella is relatively young compared to other neighborhoods in Rome. It was founded in 1920 to provide railway workers and dockers with social housing. When Mussolini came to power, he further expanded Garbatella for working-class Romans, having demolished entire neighborhoods to make way for the monumental fascist architecture of the city center.

Over the years Garbatella, although little known to visitors, has arguably become one of Rome’s most interesting neighborhoods with its very different individual houses and eclectic array of traditional restaurants and trendy bars. For me, the best way to explore it is to follow your instincts and wander along its winding, uneven streets and stairs, but if you want to follow a pre-planned route, a good starting point is Piazza Benedetto Brin , a square with a fountain in its center that is considered the main entrance to the neighborhood. This is where the first stone was laid at the beginning of the construction of the district; you can see it nestled in the large arch that greets you.

After passing through the arch, you will find yourself in a small inner courtyard, which was the heart of public housing in the early 20th century. Look up and admire the different colors of the houses. From there, walk down Via Luigi Orlando to see examples of typical of the region lotto, or residential blocks. the lotto were designed by various architects and built over 20 years, showcasing a diverse range of styles, including medieval, Renaissance and Baroque, all blending seamlessly together.

Garbatella follows the movement of English garden cities, with low-rise housing overlooking gardens and central courtyards. As you walk down the street, take a peek into the lotto gardens – they are open to the public (I suggest Lotto #5, one of the larger ones). Local residents are now used to strangers sneaking around, but be discreet and respectful.

At the end of Via Luigi Orlando you will find a square, Piazza Bartolomeo Romano, where you can stop for breakfast at Bar Foschi, a typical Italian café. Swig a al volo coffee (coffee on the fly) at the bar, as if your espresso was a shot of tequila, or enjoy a frothy cappuccino and a pistachio or jam croissant at one of the tables outside and enjoy the view.

From here you can see the local theatre, the Palladium, an Art Nouveau building designed in the 1920s by architect Innocenzo Sabbatini. It was created to provide cultural activities for local residents and has hosted concerts, film festivals and exhibitions over the decades. Today it is run by Roma Tre University and is one of the venues for the Romaeuropa Festival, a celebration of art, performance, contemporary dance, theatre, music and film that takes place every year in the city.

In the streets around the theater you will come across different types of graffiti that the neighborhood is famous for, celebrating the artistic freedom and bohemian soul of Garbatella. Take Via Francesco Passino and head for Piazza Damiano Sauli, where the gentle curves and colors of the initial stretch of the road transform into the imposing block-like buildings of this Fascist-era square.

The gray cubes don’t exactly offer the warmth of Roman life, so keep walking along Via Giacomo Rho and turn left onto Via Roberto de Nobili, where you’ll reach another colorful square that’s home to a famous cafe: the Bar dei Cesaroni. It bears the name I Cesaroni, a popular Italian television series (2006-2014) about a large Roman family whose life revolves around the neighborhood. The cafe was one of the show’s main sets.

Nearby you’ll find Ambra alla Garbatella, a theater and performance space that also hosts film and music events, as well as art exhibitions throughout the year. The theater has a reading room and a small restaurant, L’Ambretta, which serves wine and small snacks.

From there, head to the Fontana della Carlotta, located at the foot of a long staircase that leads to Piazza Giuseppe Sapeto. The fountain depicts a long-haired young woman, known as Carlotta, who is said to have greeted travelers arriving in the neighborhood in its early days. She is considered one of the symbols of Garbatella.

At this point you might be peckish, but before lunch stop in Piazza di San Eurosia for a prosecco or a spritz in one of the bars overlooking the square. This is where director Nanni Moretti in Dear Diarya 1993 film loved by the Romans, says “Le quartiere che mi piace più di tutti è la Garbatella” (my favorite neighborhood is above all Garbatella) as he speeds along on his Vespa.

From the square, walk back to Via Francesco Orazio da Pennabili, where you’ll find a few traditional restaurants, including Marisa’s Li Scalini (Marisa’s Stairs), a historic trattoria serving huge portions of excellent classic Roman dishes such as carbonara, grinned and carciofi alla romana (Roman-style artichokes) at a modest price.

Another favorite restaurant is Il Timoniere, a small trattoria run by Luciana Di Marzio and her daughter Margherita Poduti, which has barely changed in over 90 years. It’s in the basement of one of the so-called alberghi (“hotels”), erected to accommodate the Romans who were expelled from the area next to St. Peter’s Square when Mussolini built the monumental Via della Conciliazione. Luciana will know what you should have that day. Trust it: you might end up eating the best amateur of your life.

If you have time for a quick detour, just outside Garbatella is one of Rome’s four ancient basilicas, Saint Paul Outside the Walls. With its spectacular colonnade, it is one of the most majestic churches in Rome, as well as one of the four highest churches in the eyes of the papacy (with the basilicas of Saint Peter, Saint John in Lateran and Sainte-Marie-Majeure). Although outside the Vatican State, it is administered by the Holy See and was built where Saint Paul was buried in the 4th century.

Towards the end of the day, head to Piazza Geremia Bonomelli for more lotto to explore and pretty streets to photograph. When you’re ready to return to modern life, head to Latteria Garbatella, a hip bar and symbol of gentle gentrification that is slowly adding to the area without destroying it. End your visit with a glass of wine and the aperitif of the day.

What’s your favorite part of Rome? Tell us in the comments

Cities with the FT

FT Globetrotter, our insider guides to some of the world’s greatest cities, offer expert advice on food and drink, exercise, art and culture – and more.

In times of soaring inflation, how much auto loan should you take out?

The 3 Best Installment Loan Apps to Get You Started